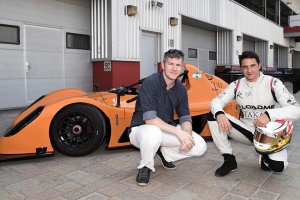 The best track experiences I had in 2016 were with Radical racing but the most fun had to be with the LoadMe Team one weekend at the Dubai Autodrome. It was a fun filled afternoon and even my teenager emerged from the Autodrome smiling from the experience. Below you will find out more about LoadMe and their partnership with Savarin Racing team.

1 THE UBER FOR TRUCKS

LoadMe is – in a nutshell type of analogy – the Uber for trucks. It is cloud-based platform that matches transporters with load owners and optimizes the chances of stakeholders to increase and better predict their revenue streams across the entire MENA region.

2 FROM TRUCKS TO TRACKS

What is the connection between the world of slow transportation trucks and fast racing cars? LoadMe wants to bring the speed from the racing universe to the freight industry of the Middle East through its realtime cloud-based model. This is why the tech startup partnered with the Savarin Racing Team in 2015 that competed in the Radical Middle East Cup at the Dubai Autodrome.

Due to the incredible results obtained by Catalin Voicu and because of the audience that is interested in discovering the changes that are happening in the transportation industry of the MENA region, LoadMe will continue to financially support and promote through its communication channels Catalin’s participation in the 2016 competition.

LoadMe is a challenger in the traditional transportation industry and it is changing the way processes works, stakeholders connect and companies optimize their revenue streams across the entire MENA region.

This is why LoadMe is supporting a great challengers such as Catalin, a pilot who has challenged the best racers in Dubai and became the Best Novice Driver from his debut year in 2015.

Me and the team at LoadMe do not share only the will to become champions but we also share the purpose to bring a better type speed to trucks and tracks, as well. I constantly analyze my results as a driver and the performance of my car and I continuously optimize, from one race to the next. This is what LoadMe is doing for each transport in the Middle East, making sure that each time, the transporters are not only moving faster but more efficiently.

3 THE ESSENCE OF TIME

In this context, LoadMe recently released a short video titled The Essence of Time that brought its director – Bogdan Zoicas – the award at the Monthly Film Festival in Dubai in July.