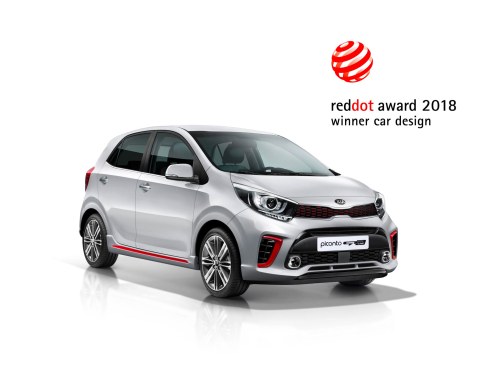 The KIA Stinger, Stonic and Picanto all won in their categories, with the Stinger winning the prestigious ‘Red Dot: Best of the Best’ award

Juma Al Majid Motors, part of the Juma Al Majid Group and the sole distributor for KIA in the UAE, is celebrating a triple win for KIA at the Red Dot Awards 2018, where the new Stinger fastback sedan, the Stonic compact crossover and the third-generation Picanto city car all won in their respective categories, including the prestigious ‘Red Dot: Best of the Best’ award for the Stinger.

KIA’s vehicles were selected from over 6,300 products from 59 countries by a judging panel comprising 40 expert independent designers, design professors and trade journalists from all over the world. The 2018 awards add to the 21 Red Dot Awards KIA has won since its Soul model first took victory in 2009, and follow a string other accolades KIA has already won this year including:

The KIA Stinger has been widely praised by the automotive media for its exceptional design, which channels the powerful, elegant spirit of historic grand tourers that transported their owners in style and at speed. At every stage of development, the KIA Stinger has been designed and engineered to be the perfect ‘gran turismo’ vehicle, featuring  a head-turning aesthetic; ample room for five occupants and their luggage; a stable, smooth ride; nimble handling with engaging, rear-biased power delivery; and a chassis and drivetrain that were honed at the Nürburgring.

Also designed in Frankfurt, the Stonic — KIA’s debut compact crossover — combines a striking and bold exterior design with an elevated seating position and practical SUV format. It is the most customisable KIA ever made, offering buyers a wide choice of two-tone paint combinations and interior colours.

The third generation of the KIA Picanto — KIA’s smallest car — brings youth and energy to the A-segment with its distinctive new design, high-quality, high-tech cabin, and exciting potential for customisation. Despite its compact dimensions, the Picanto’s intelligent design makes it one of the most spacious cars in its class.