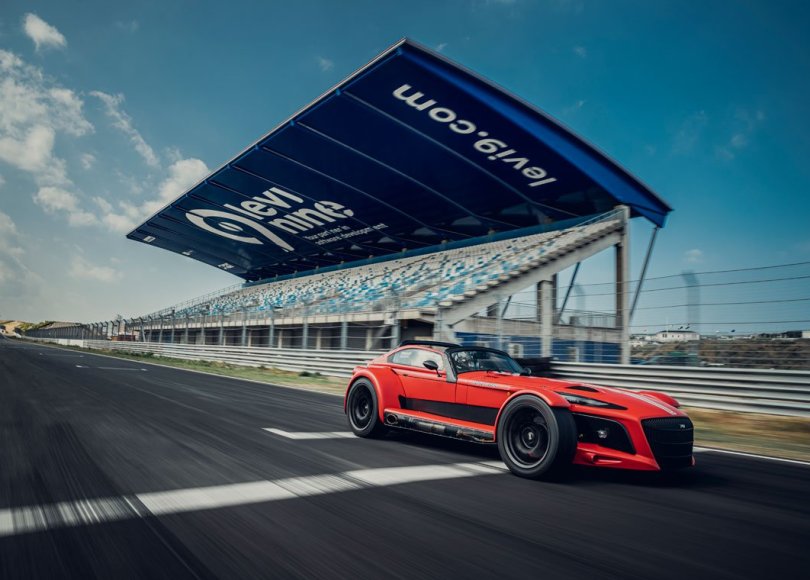 Stronger, faster and safer, the new D8 GTO-JD70 R has arrived as a track-only Donkervoort with hypercar performance and technology for only supercar pricing.

If the D8 GTO JD70 is the very beating heart of Donkervoort Automobielen, then the JD70 R is its hard-core, uncompromising soul, taking the JD70 concept into areas of performance it can only reach on race circuits.

Where the JD70 was launched this year to honour the 70th birthday of Donkervoort’s founder, Joop Donkervoort, the JD70 R has been developed to embarrass other sports car and their owners and to make its own drivers feel like track superstars.

It’s the fastest, most attacking, least compromised Donkervoort ever engineered, capable of smashing track records, winning races and doing it all on a fraction of the fuel, tyre and brake budgets of traditional sports cars.

“The changes we made were all considered during the JD70 development program,” Donkervoort Managing Director Denis Donkervoort explained.

“We made the JD70 R much faster on every racing circuit than the JD70, so naturally we also concentrated on crash safety as a priority.

“It has race ABS, a fire bomb extinguisher, greater fire protection for the fuel tank, a standard six-point harness and full race seats.”

“For every jump in speed with the JD70 R, we added exponentially to its crash protection.”

The JD70 R has been designed, engineered and developed to be driven flat out for hours on end, then refueled and sent back out on the track for more.

It has also been designed to give real-time data back to the garage, where Donkervoort’s support team can tune the car for each circuit and help the JD70 R’s drivers reach their full potential.

Donkervoort recalculated every single nut and bolt of the JD70 R when it was developed alongside the road-going JD70 supercar.

Though visually similar, the JD70 R is faster, angrier and safer than its road-going sibling, and it offers an unprecedented level of adjustability for its chassis and suspension.

It’s not just fast, though. It is available with full trackside support, from transport to catering and from spare parts, tyres and mechanical assistance to driver coaching, from Donkervoort itself.

Donkervoort concentrated on the suspension, crash safety, braking and steering of the JD70 R, creating a car that ramps up the driver engagement as well as the lap speed.

From €198,000, before tax, the JD70 R is the most exclusive, lowest maintenance and best-supported way to go hypercar hunting on the world’s racetracks.

One of the keys to driver confidence on any racetrack is how the car stops and in the Donkervoort JD70 R’s case, Donkervoort has taken care of that.

It’s not just a matter of stopping better than the JD70 on the track, but making the driver feel like it will stop better, every time, so the biggest change is the addition of the Bosch M5 Clubsport anti-lock braking (ABS) system.

The ABS delivers a massive advantage in driving consistency because drivers can use it to manufacture far greater agility from the JD70 R when they need to brake and turn at the same time.

It’s far more aggressive than it is on the road-going JD70, using racing brake pads and fluids that are more resistant to sustained heat and bite harder, every time.

It retains the brake-bias adjustment knob in the centre of the dashboard, which helps drivers adjust the car’s braking balance for different tyre wear or even different fuel loads.

The Nankang slicks and full wet tyres are offered on Rays, with the front tyres wrapping around 8 x 17” forged alloy wheels, while the rear end uses larger 9 x 18” wheels.

The super lightweight carbon-fibre rims are a factory option, as are tyre-warming blankets.

With far shorter braking distances, the next step in eking out fast, consistent track laps is the way the car turns, and for that, Donkervoort turned to a technology that hasn’t traditionally been very Donkervoort.

The JD70 R uses an ultra lightweight racing electronic power-steering system and a choice of two steering racks, including the ultra-short 2.7:1 ratio.

While Donkervoort still offers the JD70 R with a traditional steering setup without power assistance, Denis Donkervoort feels the car is faster and easier to correct with the combination of the shortest available steering rack ratio and the power-steering system.

The power-steering system is adjustable, too, to help drivers to hone in on the perfect level of assistance for them in their search for speed through confidence.

Like the JD70, the JD70 R is built around a hybrid chassis technology, combining a tubular steel ladder frame with carbon-fibre for added strength and aluminium to reduce weight.

The wide-track suspension system uses the JD70’s double-wishbone layout at each corner, with trailing arms at the rear end.

Then it changes dramatically. Its four-way adjustable Intrax dampers are 20 percent stiffer, and so are the custom springs.

The adjustable anti-roll bars are stiffer, too. Even the bushes are stiffer and the ride height is 20mm lower, all in a search for speed through confidence.

Donkervoort has made a commitment to help every JD70 R driver extract as much speed from themselves and their car as possible by making them part of Donkervoort’s own racing operation.

Donkervoort has also helped its drivers stay on the track for as long as possible with a lightweight (715kg) supercar that is much easier on its tyres, brakes and powertrain than the track versions of conventional supercars.

The JD70 R is designed to be cost effective as a racetrack car, with a set of slicks predicted to last at least 1000km, while brake pads stretch out to 5000km.

And when it comes time to replace the discs, the JD70 R’s light weight means they are made from steel, rather than the more exotic, expensive carbon-ceramic technology that heavier cars demand. They need to be replaced less frequently and when they do, it costs less.

The JD70 R delivers an enormous range of real-time telemetry back to the garage or the pitwall, which can be saved or used immediately to improve both the car and driver performance.

The first key to this is the AIM digital colour display, and its connection to the SmartyCam camera system, so even the video recordings carry all the car’s data overlays, like speed, g and tyre temperature.

The JD70 R also comes with tyre pressure and temperature monitoring, which the driver can read on the digital display and it’s also sent back through the telemetry to the garage, and it can be used on more than two sets of tyres.

There is even the option of a pit-to-garage communications package, so the Donkervoort data analysis can help the drivers in real time, with advice to change a setting or concentrate on where to gain speed.

And for those slightly embarrassing gravel-trap moments, there is a new tow hook at the rear and a new tow strap at the front.

The JD70 R has huge leaps in crash safety over the JD70, and at least one of the major improvements can be transferred directly back to the road car as an option.

Firstly, Donkervoort feels it has a responsibility to raise the crash safety of its cars at least as much as it raises their speed.

There are many areas of improvement, from the 60 percent increase in the use of Ex-Core carbon-fibre for side-impact protection to the full carbon-fibre race seats and the step forward with the latest fire-safety protection.

The JD70 R is available with either a full FIA-homologated bladder-style tank, filled with fuel-absorbing foam, or a new Kevlar-carbon-fibre protection “blanket” to add a very strong layer of protection, while also filling the tank with the FIA-standard absorbent foam.

Far cheaper than a full FIA bladder system, it has the massive advantages of being both road legal and capable of being retrofitted into any D8 GTO model.

The Bilster Berg roll cage adds 4.5kg and immeasurable peace of mind, along with even greater chassis rigidity, and there’s also a Luke six-point harness.

The upgraded fire extinguisher system comes with full FIA race homologation, with six jets to send extinguisher foam into the engine bay and the cabin.

Donkervoort can even custom design a race suit and helmet design for its drivers, with long-term arrangements with OMP for suits and Bell for helmets and HANS devices.

The JD70 R even passes the French FFSA regulations for safety, which many lightweight track specials fail, so it’s compliant with all European racetracks.