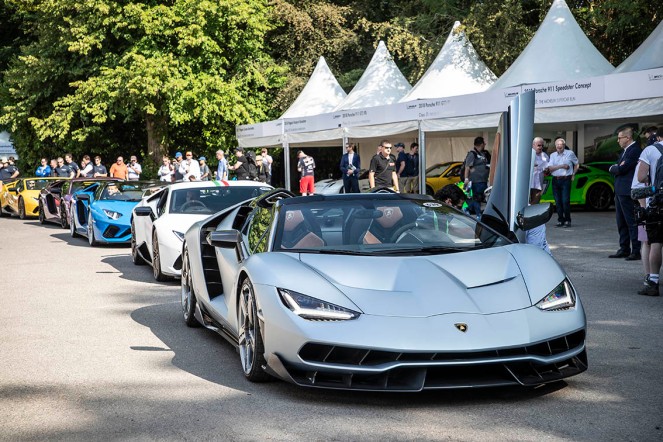 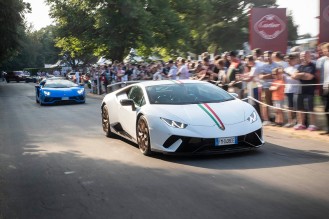 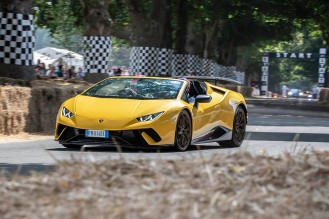 The Lamborghini Urus Super SUV will make its public UK dynamic debut at the 2018 Goodwood Festival of Speed. Displayed at the Lamborghini village alongside the new Lamborghini Performante Spyder – the convertible version of the record-breaking coupé – the Urus will also run ‘up the hill’.

Lamborghini super sports cars making the hill climb include the Centenario Roadster: one of a limited edition of 20 produced together with 20 coupés. With a start price of two million euros, the Centenario was created to celebrate the 100th anniversary of Ferruccio Lamborghini’s birthday, and all sold prior to launch.

The Centenario is joined in the supercar paddock by the Huracán Performante and Spyder, as well as the Aventador S Coupé and Roadster. “Goodwood Festival of Speed marks the arrival of the Lamborghini Urus Super SUV in the UK, with the first cars about to be delivered to customers,” said Andrea Baldi, CEO Lamborghini EMEA. “The line-up of the Urus Super SUV as well as our V12 and V10 super sports cars means that fans of Lamborghini are promised a resounding display of iconic design and performance as each car runs up the Goodwood hill.”

Automobili Lamborghini announced record worldwide deliveries to customers last year of 3,815 cars across its Aventador and Huracán ranges. More than 350 cars were delivered in the UK during 2017, which was the third largest market for Lamborghini.

The Urus, first unveiled in December 2017 and officially launched earlier this year, features a 4.0 litre V8 twin-turbo engine delivering 650 hp. The Urus accelerates from 0 to 62 mph in 3.6 seconds and, with a top speed of 190 mph, is the fastest SUV available. Lamborghini’s third model line, it will more than double sales worldwide as well as in the UK. The Lamborghini Urus retails in the UK from £165,000 on the road.