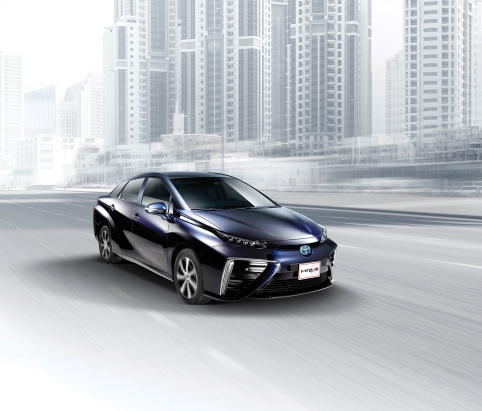 If you attended the Ignition Live Shows at the Dubai International Motor Show, you would have received an insightful exchange by automotive and hydrogen industry experts on global warming, the future of green motoring, and how hydrogen – the most abundant element on earth – can help drive a zero-emission society.

The talk was essentially about Fuel Cell Electric Vehicles (FCEV) and the role they can play in accelerating the green efforts the UAE is making to enable a cleaner air and lower carbon society, in support of the UAE Vision 2021.

But first, what are Fuel Cell Electric Vehicles?

Fuel Cell Electric Vehicles refer to a type of electric vehicle that creates its own electricity onboard, without the need to be externally charged. How? In simple words, this is how electricity is created:

Unlike a gas-powered internal combustion engine, the only byproduct from Fuel Cell Electric Vehicles is water, that some dare to drink, to prove the cleanliness of the process. The technology emits zero pollutants responsible for causing global warming, and the energy it unleashes is so powerful that it can actually send rockets into space.

The talk often referred to Toyota Mirai, displayed at the Motor Show Toyota stand, as it is the only Fuel Cell Electric Vehicle available in the UAE. The car which is being tested on UAE roads will be deployed by Al-Futtaim Motors at a larger scale with Government and private institutions, to test the viability of the technology in the local market, while the company grows its network of hydrogen stations across the UAE, following the inauguration of the first one in October 2017 in Dubai Festival City.

The discussion also touched on the hydrogen council’s efforts to promote hydrogen as an alternative clean energy.

The speakers highlighted the value of hydrogen as an excellent storage medium, effectively storing renewable energy until a fuel cell or engine converts it back to electricity.

“Hydrogen is promising fuel and energy storage solution” said Edouard Neyrand from Air Liquide during the conference. He continued: “hydrogen can be produced during off-peak periods or when there is excess renewable electricity. Then, it can be converted back to electricity to provide constant power when the renewable source isn’t available”.

When asked what the future of clean mobility looks like in the future, Ralf Zimmermann said: “I’m not claiming that FCEVs will be the only eco-friendly solution in the future, and I can believe a variety of technologies will be used to address the different mobility needs of individuals and corporations”

While Fuel Cell Electric Vehicles like the Toyota Mirai are already being sold internationally in places like US, Europe and Japan, it is yet to arrive to the United Arab Emirates.

As part of the government awareness roadshow, Al-Futtaim Motors has been facilitating test drives of the Toyota Mirai in the UAE, and has showcased the technology to over 40 high ranking government officials, who were all impressed with the vehicle’s performance.